Surgical stainless steel are used in these stud earrings, so they are fantastic for those that have sensitive ear body piercings.

Really cute round stainless steel stud earrings that are approximately 7mm round on their faces.

Available in some amazing designs.

Hypoallergenic earrings are made of pure nickel-free metals like stainless steel, aluminum, titanium, etc. They are not very expensive and are readily available in almost all jewelry stores. If you face problems finding them in your local store, check on our store Spoil Me Silly .Com .AU  as there are many of  these earrings and other stainless steel stud earrings.

From Wikipedia, the free encyclopedia 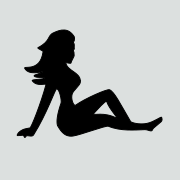 The mudflap girl is an iconic silhouette of a woman with an hourglass body shape, sitting, leaning back on her hands, with her hair being blown in the wind. The icon is typically found on mudflaps, clothing, and other items associated with trucking in the United States.[1] The image is sometimes also known as trucker girl, trucker lady, or seated lady.

This famous design was created in the 1970s by Bill Zinda of Wiz Enterprises in Long Beach, California, to promote his line of truck and auto accessories. It is variously claimed to be modeled on Leta Laroe, a famous exotic dancer at the time[2][3] or on Rachel Ann Allen, a friend’s wife, and mother of Ed Allen, the trademark’s owner.[4]